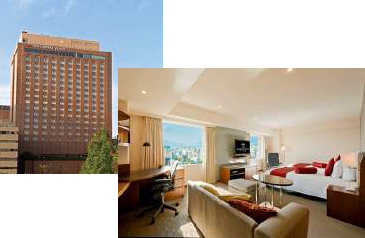 There are many hotels located around the ICCH. The City of Hiroshima offers over 15,000 hotel rooms. Most hotels have western-style rooms with some amenities including slippers and pajama sets. In addition, you may be able to have a breakfast for free in accordance to the accommodation plans. The price of hotels varies but usually costs range from 6,000JPY to 15,000JPY, per night per person.

Hostels with reasonable prices are also available around ICCH. They cost from 2,000JPY, per night per person.

More information will be added soon! 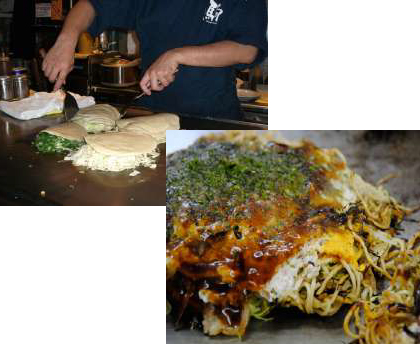 Okonomiyaki is the most traditional dish in Hiroshima, and Hiroshima prefecture ranks number one in the number of okonomiyaki restaurants per habitat when compared with other Japanese prefectures.

Okonomiyaki is cooked with cabbage, bean sprouts, pork, egg, and noodles (soba or udon) superpositioned on a thin flour dough spread similar to a crepe. This cooking method and its thick sweet sauce are different from Osaka-style okonomiyaki, which is cooked by mixing the flour dough with other ingredients. The history of okonomiyaki seems to be more than 70 years old, and it was considered a cheap snack. After World War II, a lot of okonomiyaki street stalls survived the devastating effects of the Atomic Bomb, and okonomiyaki helped the people in Hiroshima during the time of food shortage.

Oysters produced in Hiroshima are big, thick, and tasty, and Hiroshima is the number one oyster-producer in Japan. "Kakinodotenabe" (oyster bank pot) is a local dish in Hiroshima, and its residents enjoy cooking fried oysters and oysters on rice, especially during the winter months. Moreover, in Miyajima Island, there are some oyster stores that serve grilled, as well as vinegared, fresh oysters to visitors.

If you visit Hiroshima without taking the time to attentively sample the local sakes, then you're missing out. With an estimate of 50 brewers, Hiroshima is one of the three major sake-producing areas in Japan. The town of Saijo, located in Higashi-Hiroshima city, is famous for making sake since the Edo period, and there are very old sake-brewery buildings in this town. The sake produced in Saijo is one of the three most famous Japanese rice wines made in Japan. You should visit a brewer and experience the world of sake!